I remember hearing about Marian Keyes having a bad time but beyond feeling sympathy for her, I didn’t think too much of it at the time. Then over the last couple of years my own problems kind of took over everything. 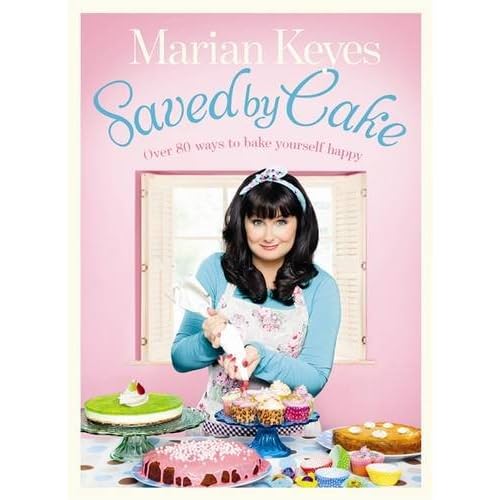 When I saw a copy of Saved by Cake on the shelf in Waterstones, it drew me in first by the gorgeous cover with its retro colours and style. Then I noticed the author and remembered her having troubles, which led me to pulling the book down and reading the intro, and flicking through the recipes. I then spent the next two weeks either drooling over the pictures I had seen or feeling drawn to Marian’s brutally honest description of her depression and her warm and witty way of writing until I got the book for myself yesterday.

I spent all evening reading every single recipe (when I was allowed to; Emily shows every sign of inheriting my penchant for cakes and insisted on looking at every picture herself. Two or three times…) and trying to restrain myself from rushing straight out to Sainsburys and buying a list of ingredients and cookie cutters (do read her take on cookie cutters. I love it!) a mile long. I decided to limit myself to trying a recipe a week (well, maybe two…) and this morning bought the ingredients for the first one to do some time this week, probably at the weekend.

Then this afternoon I went to a parent and toddler group. Now, I’ve mentioned my social anxieties before. They make these groups a particular kind of torture, and I’m serious, I think I get through the entire group without more than 5 words spoken to anyone except Emily. I spend all the time I’m not talking feeling miserable and anxious about not talking and it all goes horribly wrong. Emily goes home bouncing because she’s had time with new toys and I go home ready to burst into tears, every bad feeling about myself confirmed again and again. So this afternoon when I came home, I thought ‘Why not, let’s give Saved by Cake a go,’ and did the Blondie cupcakes (white chocolate and macadamia nut…).

Now, there’s a funny thing about baking as therapy. I do have a tendency to comfort eat, but that’s the weird thing. I found baking these cupcakes (and most of the cooking I’ve done over the last few weeks) unbelievably calming. I feel much better and I’ve only had half of a cupcake (just to test, y’know). It’s not the end result that’s the point of doing this, as nice as it is; it’s completely about the process.

It’s not like I’ve just discovered baking through Marian Keyes, I’ve been increasingly keen on cooking and baking over the last couple of years and it’s picked up madly since we moved house and I got a really nice oven (my last oven was no good for baking as the flame went under the floor of the oven and burned the bottom of stuff before the top was cooked. I daresay a good cook could have managed with it; I’m not that cook). I’ve done a few nice cakes lately, mostly plain sponges with cream and strawberries, and a couple of packet mixes – highly recommended for a quick and cheap cake fix eg for Sunday tea as they’re very light and tasty and did I mention cheap? But Marian Keyes’ book has opened up a whole new world of flavours and possibilities, both classic and traditional as well as more exotic like Chocolate, Cardamom and chilli tart, and it’s totally about the process, like I said earlier. If you want a cake for the sake of eating it, buy a packet mix or even a ready made one. If you want to bake and be Saved by Cake, buy this book and start exploring.

And incidentally, her simply wonderful voice shines through and has made me into the latest Marian Keyes fiction fan. Now I’m off to snuggle down with a Blondie cupcake and a novel.