Uh oh. That was a bad start to the A-Z Challenge, wasn’t it? When I realised I’d missed C, I thought I’d combine it with D in a post. Then I didn’t get to do one for D either so I thought I’d try really hard to combine C, D and E (while thinking “Oh crikey me how on earth am I going to do that??”). But yesterday was a bit mad too, so I didn’t get that done. Now, there is no way in the world I’m going to be able to combine C, D, E and F so I’m going to admit failure and consign C, D and E to the great blog heaven in the sky.

Failure is a recurring theme – for me and, I imagine, for most people. Things we haven’t done, or haven’t done as well as we could have. I failed to do many things and some of them I’ve made peace with, some continue to be regrets. Failure can be particularly painful when you suffer from low self-esteem as it reinforces the negative impression you have of yourself. It also tends to be self-perpetuating. You fail at something, so you think “I really must do better next time” and not only do you set up another set of hurdles for yourself, you also put more importance on not falling at them. If/when something goes wrong with this new plan, you’ve failed again, you’ve failed worse, and you’re generally a failure at life. So I’ll start another thing, and on it goes. The achievement of actually finishing something is immense, as when I finished my first draft of Skive which is now thoroughly cooled off and awaiting rewrites. But there are still many, many past and current failures drowning out that little success.

Failure is also very much down to perception. I tell myself I’m a failure because I don’t always complete things, I don’t get done the things that I both want and need to get done, and I have unfinished manuscripts or blog challenges or housework. Beloved Husband thinks I have unrealistic expectations of myself and that I’m doing pretty well to keep on top of the house and look after the kids. I think he’s lovely but biased. Another cycle!

I would love to be able to find a way of changing my perception. I’d love to be able to look at my failures and think “At least I gave it a go.” I’ll give pretty much anything a go, which should be exciting and interesting instead of a quick ticket to “Oops, I Did It (Or Rather, Didn’t) Again.” I think it could be helped a lot by realising that nothing is permanent. Because I leave something to one side for now, it doesn’t mean I’ll never come back to it, it just means that now isn’t the right time. My historical novel has been a Work In Progress for about two years now but it doesn’t mean I’ve failed to write it, just that I haven’t finished it YET because it’s not the right time. 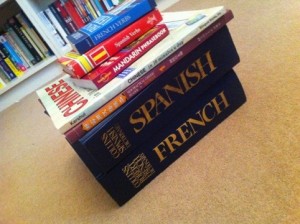 At school I was a languages whizz. It was always what I was going to do, I even did the first year of a degree in Interpreting and Translating. Since I did my GCSEs a million years ago I’ve had two huge dictionaries, one in French, one in Spanish, and a few verb books. I’ve never been able to bring myself to throw them away even though I’m no longer considering a career in languages. We had a book clearout the other day and I put the verb books on the pile of books to go. Then I picked them up and thought about one of my big regrets, my failure to finish my degree. Beloved Husband said “You know, you don’t have to get rid of them. You can always take it back up again any time.” He’s right you know, but don’t tell him. I haven’t failed at languages, I just didn’t finish my degree. One of my ambitions is to do an Open University degree in the Arts; I’m keeping my languages books in case some of my modules end up being languages, and I finish what I started.