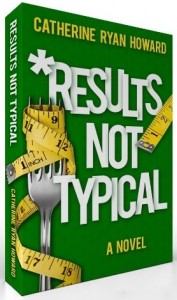 Today sees the last of my little run of blog tour guests, Catherine Ryan Howard, talking about her latest adventure self-publishing a novel Results Not Typical. Thanks for stopping by My Little Notepad, Catherine!

Can you give us a rundown of your story so far?

I self-published a travel memoir in March 2010 that had been rejected all over town for having no market. I didn’t really know what I was doing but through trial, error and Google I figured it out and eventually sold a few thousand copies of Mousetrapped. Self-publishing was supposed to be just what I did to keep me in coffee while I wrote a novel that I hoped would get me traditionally published, but after I got some sales I decided to concentrate on it a bit more than that. So since then I’ve also self-published a “How To” book (Self-Printed), another travel memoir (Backpacked) and now a novel, Results Not Typical.

You’ve always said you would absolutely not self-publish a novel. Do you find your words coming back to haunt you now?! Why the change of heart?

Um, yes, definitely! I’ve learned my lesson now and it’s shut the hell up about what you’re “never” going to do… I changed my mind because originally, I thought that while non-fiction could be good but get rejected on the strength – or weakness, rather – of it’s potential market, surely a novel would get published if it was good enough. Therefore if it wasn’t good enough, it wouldn’t, and it should probably stay in a drawer. But after submitting Results – a corporate satire/chick lit affair – and getting great feedback about the writing, etc. but being told yet again that it wasn’t what was selling in the market right now I thought, well, my other books are selling so why not self-publish this too? It’s also very different from the book I’m writing now that I hope to submit, so I feel as if I may as well. It remains to be seen whether or not it was a good decision!

Do you find writing a book is becoming progressively easier, since you’ve done four now?

Not a chance. I think it gets slightly worse. Writing Results took three drafts and the best part of a year – of full-time writing. When I think back to the first draft and how it bears absolutely no resemblance to the finished product, I feel a little bit sick. You think to yourself, how can I possibly do all that again? So um, no, sorry!

What marketing advice can you give someone who has self-published a novel, and how is that different, if at all, from marketing a non-fiction book?

I think marketing a novel is much harder. With Mousetrapped, I had a few calling cards I could use. The book featured Walt Disney World, NASA, living abroad, etc. so right from the start I could target people who liked those things. A novel presents an entirely different set of challenges, which I’m still trying to work out! I think the best thing to do is just let as many people know about it as possible – hence the blog tour – and then make sure you have a good cover (which I do, thanks to your talented cover designer husband), an enticing product description/blurb and a convincing price. After that, you’d just better hope luck comes around.

Wait. That’s my number one tip. It took six months for Mousetrapped’s sales to go anywhere, and a full year for them to take off. I’ve sold nearly 9,000 copies but the first month I think I sold 60 or something, and most of them were to people I knew. You have to keep plugging away at your promotion, and have some patience. At the very least, wait a year.

And what’s next for you?

Taking some time off self-publishing to work on a novel that I hope a publisher will like. Wish me luck!

Buy Results Not Typical on Amazon.co.uk or Amazon.com

If you visit http://www.goodreads.com/giveaway/show/14791-results-not-typical you can enter a giveaway to win one of five paperback copies of Results Not Typical. Open for entries from September 30th-October 31st. Open to all countries. 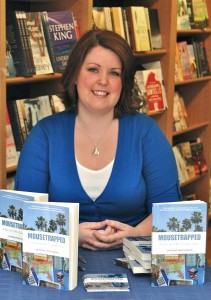 Catherine Ryan Howard is a 29-year-old writer, blogger and enthusiastic coffee-drinker. She currently lives in Cork, Ireland, where she divides her time between her desk and the sofa. She blogs at www.catherineryanhoward.com.

About Results Not Typical:

The Devil Wears Prada meets Weightwatchers and chick-lit meets corporate satire in the debut novel from Catherine Ryan Howard, author of the bestselling memoir Mousetrapped: A Year and A Bit in Orlando, Florida. Through their Ultimate Weight Loss Diet Solution Zone System, Slimmit International Global Incorporated claim they’re making the world a more attractive place one fatty at a time. Their slogans “Where You’re Fat and We Know It!” and “Where the Fat IS Your Fault!” are recognised around the globe, the counter in the lobby says five million slimmed and their share price is as high as their energy levels. But today the theft of their latest revolutionary product, Lipid Loser, will threaten to expose the real secret behind Slimmit’s success…The race is on to retrieve Lipid Loser and save Slimmit from total disaster. If their secrets get out, their competitors will put them out of business. If the government finds out, they’ll all go to jail. And if their clients find out… Well, as Slimmit’s Slimming Specialists know all too well, there’s only one thing worse than a hungry, sugar-crazed, carb addict – and that’s an angry one. Will the secret behind Slimmit’s success survive the day, or will their long-suffering slimmers finally discover the truth? Available now in paperback and e-book editions.