One of the things I’ve said about ebooks from the beginning is “Great idea, but children’s books won’t work that way.” One of the many examples of me not thinking out of the box, as proven recently by Nosy Crow‘s Three Little Pigs iOs app.

We got this recently as a treat for Daniel as I’d heard many great things about it and when we got the iPad it was a good chance to try it out. I was absolutely blown away. It’s not the first children’s book app we’ve had, but it’s on a different level. One of my problems with the earlier book apps was that they were basically just reading the story and the interactivity was limited to the child turning the page or possible pressing a picture to get an extra sound effect. Two, if you were lucky. Now that’s all well and good but it’s why I always thought children’s ebooks wouldn’t work. Daniel wasn’t really getting anything from those he wouldn’t have got from us reading to him except the convenience of it always being there, and we were all missing out on the chance of snuggling up with a story. 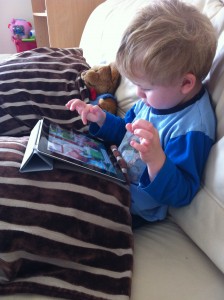 The Nosy Crow app was different. On one level it can be read to the child as the other apps I mentioned. But if you press ‘Read and Play’ it comes into its own. The child is actually driving the story. It’s not interactive or reactive – it’s proactive. Daniel has to help the pigs build the house for example, or blow the house down. Even 14 month-old Emily knows that to blow the house down she has to blow on the screen (of course, she hasn’t QUITE got the hang of blowing yet, it’s more a spattering of saliva all over the iPad screen. And kudos to her daddy who winces a little inside but still lets her have the fun of joining in).

There ARE elements that are more like Easter Eggs, and they are charming, such as finding a little rabbit playing hide and seek in the hay bales, but they are extras, they’re not the whole point of the app which is how it should be.

The animation is fantastic, and it really reacts to you – for example when all three houses are built at the end tilting the iPad slightly adjusts the angle of the picture. When the truck is driving along the road, a similar effect. And I have to say the child reading the story has a great career in the media – they are not twee or affected, but inject life and drama into the experience.

I still don’t think ebooks will replace children’s picture books entirely, but unless I’ve misunderstood, Nosy Crow aren’t trying to. They have produced a complementary reading experience and other companies trying to do the same thing should really take them as an example of how it should be done. It cost £4.99, so slightly less than a paper picture book and well worth every penny. Nosy Crow are bringing out another app soon and I can’t wait to see it.

And one final thing? It’s perfect for snuggling up together.