This evening I have been making a cape and crown for my three year old son to wear to nursery tomorrow as a Prince (except he wants to be a King instead. Good lad – aim high). He has a vague realisation that some mystery Prince is marrying a girl who will be a Princess – I’m fairly sure he thinks he’s featuring in Cinderella. He’s not really interested – if Prince William had had to fight off a fire-breathing dragon to rescue Kate Middleton (or vice versa, I’m not bothered) Daniel might have been more enchanted by the whole thing, but as it is he’s just concerned that I finish his King outfit so he can wear it. When I was a little girl I’d probably have been more interested, as we’d have been talking Princesses in wedding dresses and there is very little else that could have been so well-calculated to appeal to me. I was a very, VERY girly girl and the fairytale version of royalty still has me a tiny bit under its spell despite my socialist political leanings.

If I had to name one of the moments that defined me as a child and that has lingered with me throughout my life, it would be the scene in The Slipper and the Rose where Cinderella interrupts the Prince’s wedding to Another and then they go on to have their own far superior version. The way the Fairy Godmother heralds Cinderella’s entrance is just brilliant, and for feminists – you want a strong girl taking matters into her own hands, defying the King? Here you go. I’m over 30, I’ve seen that film a million times, and I still get a little thrill at this scene.

Another film wedding that I just love is Maria’s wedding in The Sound of Music.Everything about it is perfect – the dress (which is how I always wanted my dress to be), the HUGE long walk down the aisle, the triumphal music, the joyous solemnity.

Probably one of my favourite games when I was a little girl was pretending I was one of these brides or some nameless other, almost certainly a princess or a princess-to-be, dressing up in a net curtain and a sheet tucked up inventively to make a big, white dress. I don’t know if every girl dreams about their wedding, I just know that I did. I had a clear picture of how I wanted things to look and how the day would go. As I grew up that picture stayed the same – the Dress may have changed a few times as my taste matured but basically it was The Works. I got engaged and the picture became a little more hazy – mostly because real life was starting to tug insistently at our purse strings and to get the wedding we wanted we knew we’d have to either wait a little or compromise a lot.

Then, for various reasons, we realised that what mattered more than the Wedding was the Marriage. We ended up getting married on my birthday five years ago, on a shoestring. I wore a suit, we drove to church in our own car and our friends rallied round to help us out with a bouquet and cake. But all day I never gave a single thought to the dress, the limo, the many-tiered spice cake. I mean that – not once, all day. I’m not sure I stopped smiling until my new husband and I sat down for supper. I’ve never, not once, regretted it either. With all the intense joy of each of my babies’ births, I still say hand on heart that that day is the happiest day of my life, and that our Marriage that day, that way, was the best thing we ever did.

Here’s us outside the church: 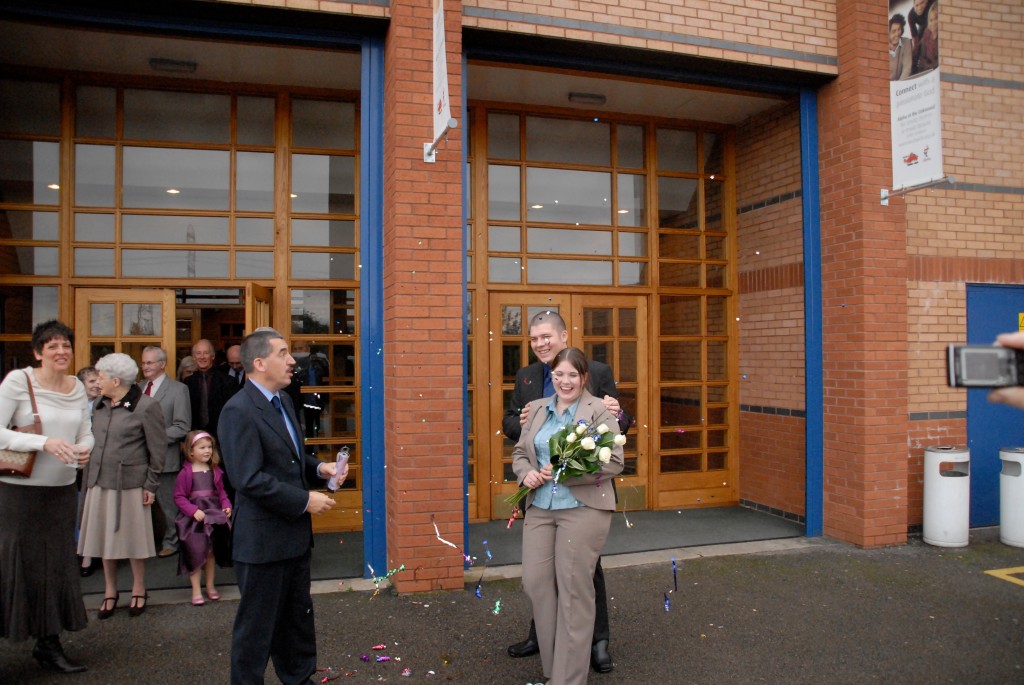 Here’s a close-up of that: 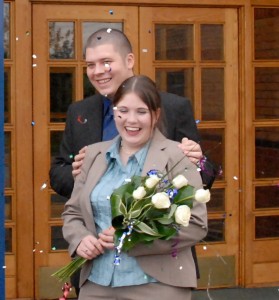 There’s a great deal of cynicism about the Royal Wedding and many people are understandably sick of hearing about it. But at the end of the day it’s a young couple about to have what should be the best day of their lives. I genuinely wish the real-life Prince and Princess-to-be as much happiness on their wedding day as I felt in the moment captured by that photo.