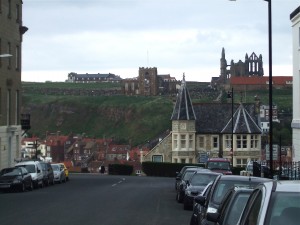 Some days, you just know, will stick in your memory. Or maybe not the whole day, just snapshots from it. You can take as many pictures as you like but you know that if you close your eyes you will be right back in the moment, every sensation as vivid as it is now.

Today was like that. Having pre-arranged to meet Twitter friends Jo Cannon and Jane Smith in Whitby, I suddenly found myself without car and the trains running at such intervals that I’d have to either be in Middlesbrough at 7am or miss it altogether. As a last resort I tried the bus timetables and lo and behold, not only was the bus fare cheaper than the train or the petrol, it was also a quicker journey than the train. I still can’t quite figure out how…

So, anyway, I reckoned this would be an adventure. Due to us being gas-guzzling, spoiled-rotten car users, my kids can probably count on one hand how often they’ve been on a bus.

I was SO right. Daniel loved it, Emily chafed a little by the end of the hour’s journey at being strapped into her pushchair but she was as good as gold really. So what could have been a total nightmare (2 small children on a bus for an hour… my blood runs cold at the thought of what could have been) was delightful.

Meeting Jane and Jo was as wonderful as I’d hoped. Chatting with them on Twitter helped me get over my stupid shyness and I tried very hard (I really did!) to not talk about the kids the whole time – difficult when they kept complimenting them on their manners and general gorgeousness (yes that was a gloating mum moment. Get over it). By the way, if anyone is in Whitby I cannot recommend Bothams enough. A special atmosphere, gorgeous tea and cakes and such friendly, lovely staff. And especially try the peach cheesecake. Anyway…

We wandered down to the sea afterwards, seeing parts of Whitby I hadn’t seen before but will again. We got a snack from a chip shop and sat and ate it by the water and watched the swing bridge let a couple of racing boats through. Eventually we got the bus home and again the children were near angelic. One of the happiest days I have had in a very long while.

And on the bus on the way home I looked at my beautiful children and just knew. This was a memory day.