This week’s #Fridayflash comes from a story I did at sixminutestory.com, but I’ve expanded it a little. You can read the original here.

Katie hated kids’ parties. She had had to be blackmailed into taking her niece to this one, and it was only because she couldn’t stand Lucy looking at her with such disappointment in her great big eyes that she’d caved. Lucy had the guilt trip thing nailed, even at four years old.
So she’d promised herself a drink afterwards to blot out the horror, strapped on the most unsuitable shoes she could think of for a party, put her make up on and braved the church hall. 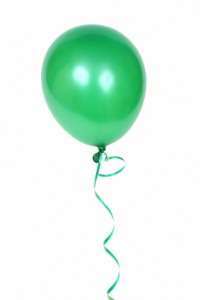 It was worse than she’d imagined. What, had they invited 100 little monsters to run around for three hours, covered in cake and lemonade and who-knew-what else? She winced several times as snotty noses and sticky fingers came dangerously close to her suede top. Lucy looked at her a few times, her little face falling every time. Katie tried very hard not to notice other adults joining in with the silly games and shrieking and running. She did notice the other adults stealing glances at her outfit and her makeup and her petrified pose in a corner of the room. They were probably just jealous because she wasn’t making a fool of herself.

Eventually Lucy came up to her, grabbed her hand and pulled her into the other room. She grumbled all the way in, no idea what new torture Lucy wanted to inflict on her, and nearly ran the other way when she saw it. A huge, brightly coloured, bouncy castle. Red and blue and yellow plastic, constantly moving, swarming with little people. If that didn’t make her cringe enough, the smell of the rubber and the relentless noise of the blowers mixed in with a million high-pitched screams nearly finished her off.

“No.” she said flatly. “No way Luce.” Lucy’s lip quivered and a tear drop gathered. Katie sighed, and pulled her shoes off. She really was putty in Lucy’s hands; she was going to have serious words with her smug little brother when she saw him about his daughter’s brutal tactics. She climbed ungracefully onto the castle, ignoring the sniggers of the parents who had watched her all afternoon.

Bounce once. Bounce twice. Bounce a little higher. Bounce a little faster. Suddenly she felt her face crack, wider and wider until she saw Lucy’s face reflect the grin that was on her own. She couldn’t remember the last time she had felt this free, this careless. Her tights caught on a stray piece of velcro and she didn’t even notice the ladder run up her leg. Katie grabbed a balloon and passed it to Lucy, and they played a bouncy passing game until Lucy got bored and ran off to play with a friend.

Eventually Katie noticed Lucy sitting, waiting. The children had vanished, along with the sunlight that had streamed in through the windows. The birthday boy’s parents were making loud clatters as they clashed around tidying up, trying to hover near the castle so they could turn the blowers off. Katie climbed down, clinging onto her balloon and her shoes in one hand and held the other hand out to Lucy.

“Have fun, Luce?” she asked. Lucy nodded, a sleepy smile stretching across her face before turning into a yawn. Katie reached down and swung Lucy up so she clung around Katie’s neck, and they drifted out to the car, a lone green balloon bouncing along above their heads.